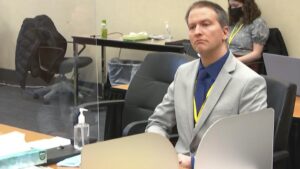 Derek Chauvin’s lawyer filed a motion seeking a new trial, alleging prosecutorial and jury misconduct, and saying a change of venue should have been granted.

Mr. Chauvin was convicted last month of two counts of murder and one count of manslaughter for kneeling on George Floyd’s neck and back for 9 minutes and 29 seconds, while Mr. Floyd was handcuffed and lying prone in the street. Mr. Floyd’s death sparked a summer of unrest in Minneapolis and across the country.

Eric Nelson, Mr. Chauvin’s attorney, requested a hearing where the judge could reinterview some jurors. He said the purpose of the questioning is to show the jury “committed misconduct, felt threatened or intimidated, felt race based pressure during the proceedings, and/or failed to adhere to instructions during deliberations, in violation of Mr. Chauvin’s constitutional rights to due process and a fair trial.”

Mr. Nelson didn’t name a specific juror or explain what misconduct he is alleging in a court filing Tuesday. He asked the court to grant him more time to fully investigate the issues.

“The court has already rejected many of these arguments and the State will vigorously oppose them,” John Stiles, deputy chief of staff for Minnesota Attorney General Keith Ellison, said in a statement Tuesday evening.

In total, the motion alleges eight abuses of discretion by the court.

Judge Peter Cahill had denied requests for a retrial at multiple points during the proceedings after Mr. Nelson said that the jury was being swayed by pressure to convict Mr. Chauvin out of fear that a failure to convict would unleash a new round of social unrest in Minneapolis.