Tokyo Extends COVID-19 State Of Emergency Until May 31

by People & Power
May 7, 2021
General, Uncategorized
No Comments 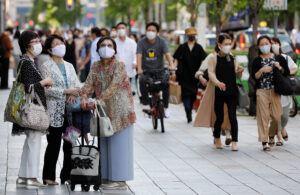 The Japanese government decided Friday to expand the COVID-19 state of emergency beyond Tokyo and the Osaka region and extend it to May 31 in an effort to bring down infections and ease the strain on hospitals.

Prime Minister Yoshihide Suga formalized at a task force meeting the decision to continue restrictions on dining establishments and other businesses past the original end date on Tuesday and to add Aichi and Fukuoka prefectures from Wednesday.

But the government will ease some measures including those on department stores and movie theaters to mitigate the damage to the world’s third-largest economy.

The third state of emergency during the pandemic has been in place in Tokyo, which is set to host the Summer Olympics in less than three months, as well as Osaka, Kyoto and Hyogo prefectures since April 25, with targeted steps aimed at curbing the spread of the coronavirus during the Golden Week holidays.

Restaurants serving alcohol and large shops in the capital, along with Osaka, Hyogo and Kyoto prefectures have been asked to close – with fines imposed on these who fail to comply – while “dry” establishments are encouraged to close at 8pm.

Residents have been advised to avoid non-essential outings, but analysis of foot traffic suggests that many people are unwilling, or unable, to stay home.

“We have a strong sense of crisis,” Yasutoshi Nishimura, the minister in charge of the government’s coronavirus response, said at a meeting with experts in infectious disease and other fields. “We will thoroughly curb infections and make sure the number of newly infected declines so that people feel safe.”

An online petition calling for the Games to be cancelled has attracted almost 200,000 signatures in the space of a couple of days.

“We strongly call for the prevention of spread of coronavirus and protection of lives and livelihoods by using available resources to stop the Olympics,” said Kenji Utsunomiya, a prominent lawyer and former candidate for Tokyo governor who organised the petition.