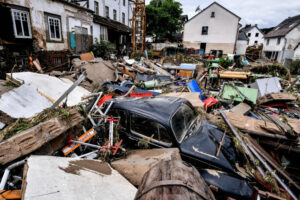 The death toll from catastrophic floods in western Germany and Belgium has risen to more than 100, local authorities have said, as emergency services continued their search for hundreds still missing.

“I fear that we will only see the full extent of the disaster in the coming days,” the German chancellor, Angela Merkel, said from Washington late on Thursday, calling it a day “characterised by fear, by despair, by suffering”.

Authorities in the German state of Rhineland-Palatinate said 50 people had died there, including at least nine residents of an assisted living facility for people with disabilities, while neighbouring North Rhine-Westphalia put the death toll at 43.

Officials warned the figures could rise further. About 1,300 people in the devastated Ahrweiler district of Rhineland-Palatinate remain unaccounted for, although efforts to contact them were being hindered by badly damaged phone networks.

The regional interior minister, Roger Lewentz, told broadcaster SWR that “40, 50 or 60 people could be missing. When you haven’t heard for people for such a long time … you have to fear the worst. The number of victims will likely keep rising.”

Belgian authorities said the country’s death toll had risen to 12, with five still missing. Most of the dead were found around Liège, a city of 200,000 people, despite an order for residents of central districts and areas bordering the Meuse river to evacuate.

“My empathy and my heart go out to all of those who in this catastrophe lost their loved ones, or who are still worrying about the fate of people still missing,” Merkel told reporters in Washington, where she was visiting Joe Biden.

She said her government would not leave those affected “alone with their suffering,” adding that it was doing its “utmost to help them in their distress”.

Experts said the European Flood Awareness System (EFAS) issued an “extreme” flood warning earlier this week and questioned why the toll was so high. Hannah Cloke, a hydrologist, told Politico the disaster was “a monumental failure of the system”.

The German weather service DWD said it had passed on the warning to local authorities, who should have been responsible for organising any necessary evacuations. The interior minister, Horst Seehofer, said Germany “must prepare much better” in future, adding that “this is a consequence of climate change”.