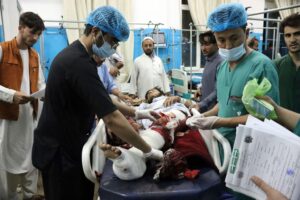 The death toll from two blasts at Kaul’s airport has risen to 72, two officials who worked in the ministry of health until the Taliban takeover told AFP on Friday.

“There are many women and children among the victims. Most of the wounded people are in trauma and shock,” one of the former officials said, adding the toll only accounted for those taken to city hospitals.

The blasts at Kabul airport on Thursday caused “total panic” among Afghans who had thronged outside in the hope of fleeing to safety, away from the country’s new Taliban rulers.

Wounded men in blood-soaked clothes were ferried away from the scene in wheelbarrows, while a boy clutched the arm of a man with a head injury, in images posted on social media.

“Bodies, flesh and people were thrown into a canal nearby,” said Milad, who was at the scene of the first blast.

“When people heard the explosion there was total panic. The Taliban then started firing in the air to disperse the crowd at the gate,” a second witness said.

The head of US Central Command on Thursday vowed retaliation for the deadly attack at Kabul airport he blamed on “two suicide bombers assessed to have been ISIS fighters”.

“We are working very hard right now to determine attribution, to determine who is associated with this cowardly attack, and we’re prepared to take action against them,” said General Kenneth McKenzie.

He added that US forces were “prepared and ready to defend against” possible further ISIS attacks.