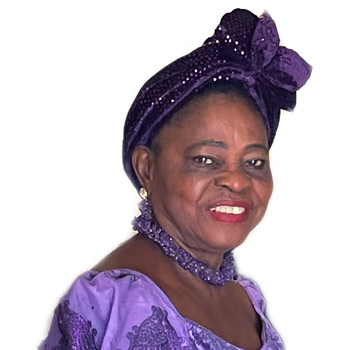 Chief (Mrs.) Aku Christy Orduh is a unique Nigerian woman. She has dedicated her life to the uplift of people with disabilities in society.

These several years, she has made remarkable achievements through the charity she founded which is called Friends of People with Disabilities (a.k.a. Friends of the Disabled). She is the Executive Director of this outfit which is located on the Lagos Island.

Before going full – time into the world of charity and philanthropy, she had a fulfilling teaching career in the Lagos State Teaching Service. She served in various schools and held various positions until she retired as an Assistant Director of Education.

Chief (Mrs.) Aku Christy Orduh grew up under the close watch and training of her mother, a kind, selfless, charitable and industrious woman who trained many children from her immediate family, extended family and other relations. She attended her primary and post primary education all within the Catholic Convent School systems, and there she embraced the skills, love and management techniques of the Rev. Sisters and missionaries. While in school, she belonged to Legionary group that go out to Saturdays to help the aged and the sick in their homes with cleaning and offering some gifts within their means.

Coming to Lagos as a teacher in 1973, Chief Aku Christy noticed some young disabled boys on crutches and later skate boards, begging to survive.  She could not understand why they were not able to go to school or learn a trade or skill to enable them earn a decent living. This inspired her to care and do something to help them. She traced where they (about 25 of them) spent their nights in a make-shift structure in Car park 4 Marina. She started interacting with them, and recognized that efforts to integrate people with disabilities into the main stream of the society are often hampered by societal prejudice and unrelenting poverty coupled with discrimination. Thus, without tackling these fundamental problems, any rehabilitation and integration programs will not be successful. With this understanding and experience as a seasoned Educationist and Social Entrepreneur, she tackled the problem by developing an enabling and non-discriminatory environment in which people with and without disabilities can interact.

She established and started a Vocational Centre in a set of dilapidated buildings in Lagos Island. With the approval of the Lagos State Government and the Federal Government respectively and with sponsorship and support from national and international organizations and embassies too many to mention, the building was renovated and converted into an inclusive centre with training facilities and hostels for male and female student accommodation. The skills acquired there are in shoe making, tailoring and fashion design, metal work and fabrication, bead making and fish farming. Also, a computer lab and facility was incorporated for students who have interest in computing. She concentrates the employment in the Centre to people with disabilities and extend hands to Organisations and Government to employ them. Currently, some ex-students of the Centre serve as trainers and earn an income from their work in the center.  Those with flair and interests for further studies were linked and given support; three of such graduates are currently working in Lagos, Katsina and Imo states respectively. Over 150 graduates of the center received equipment and tools from sponsors on their graduation day to aid the establishment of their own businesses. They constantly come back to the center to consult, discuss and rub minds with their trainers. The vocational center is managed by a team of Trustees and Advisers. Founded in 1990, Friends of People with Disabilities (a.k.a. Friends of The Disabled) is today, one of the longest surviving Indigenous Charitable Organisation/NGO in Nigeria.

Chief (Mrs.) Christy Aku creates programs that respond to the physical, educational, economic and social needs of people with disabilities. Furthermore, the establishment of the vocational training Centre in Lagos Island increased physical contact with the rest of the society and improved the possibility of the disabled gaining access, acceptance and integration into the community, through economic transactions of buying materials from the populace and in turn selling their products to them. Chief Aku Christy believes that Inclusive approaches and programs is the best strategy to combating discrimination. In line with this, she participated in the National Education reforms as one of the Stakeholders, where they advocated and recommended Inclusive Education for those with disabilities. This is now practiced by some States as Inclusive Units that brings the non-disabled and people with disabilities in the same main stream schools. This strategy has created an enabling environment for reducing discrimination and isolation of people with disability.

Christy Aku knows that for people with disabilities to really live fulfilling lives, the social stigma associated with their condition needs to be removed and legal protection for their rights enforced. Consequently, she started a campaign with the Civil Liberties Organization, (a leading global human rights organisation) to draft and present a disability bill to the National legislature which now has received the President’s consent and approval after so many years of amendments. Her strategy and experience in this area enabled a friend of the center, a graduate with visual impairment, gain instant employment to teach in any Federal Government College. This was achieved by asking him to make a presentation of bill sponsored by the then Deputy Speaker, Hon. Chibudom Nwauche to the legislature.  This is one of her strategies of highlighting those who are qualified but cannot get jobs due to disabilities. She has successfully collaborated with the National Directorate of Employment (NDE), a Parastatal in the Federal Ministry of Labour and Productivity, from 1998 to date, and with Federal Ministry of Women Affairs. She has received support and encouragement through partnership with private institutions such as, MTN, civil societies and organization such as, Society of petroleum Engineers, and other National and International Bodies/Organizations, to mention but a few.

One of her current and ongoing development is in the area of sign language because the hearing and speech impaired still experience isolation and discrimination. This is largely because the immediate and wider society do not know or understand their language. They mostly communicate and feel happy and relaxed when they are with their group or with someone who knows their language. To this end, Chief Aku Christy is floating and encouraging the learning of sign language among children and youths, catching them young, as a way of breaking the communication barrier between the hearing, “normal” and the hearing and speech impaired. Her organization partners now with NYSC in sign language as their SAED skill and also have gotten approval from the Lagos State Universal Basic Education Board (SUBEB) for the primary classes which is on-going in Lagos State. Hearing and speech impairment is the only disability that can be conquered and dismantled by mere learning of a language if people can be empathic.

It is in recognition of her contribution to national development in the area of Support, Uplift and Empowerment of People with Disabilities in Nigeria that Chief (Mrs.) Aku Christy Orduh was deemed worthy to be conferred with the Woman of Merit Gold Award (WMGA) which is part of the 21st PSR National Awards.