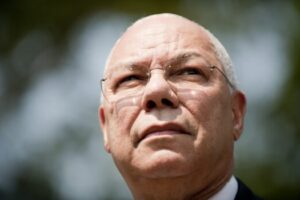 Former US Secretary of State Colin Powell has died aged 84 of Covid-19 complications, his family has announced.

He was a former top military officer who rose to become the first African-American secretary of state in 2001 under Republican George W Bush.

“General Colin L. Powell, former U.S. Secretary of State and Chairman of the Joint Chiefs of Staff, passed away this morning due to complications from Covid 19. He was fully vaccinated,” the family said in the statement. “We want to thank the medical staff at Walter Reed National Medical Center for their caring treatment. We have lost a remarkable and loving husband, father, grandfather and a great American.”

Mr Powell became a trusted military adviser to a number of leading US politicians.

Powell, the son of Jamaican immigrants, became the first Black national security adviser during the Reagan administration. President George H.W. Bush tapped Powell to be the youngest and first Black chairman of the Joint Chiefs of Staff.

As chairman, he oversaw America’s Desert Storm operations during the Persian Gulf war. After 35 years of military service, Powell retired from the U.S. Army as a four-star general.

In 2001, he became the first Black secretary of State under President George W. Bush.

On the heels of the September 11 terrorist attacks, Powell supported a swift military response against al-Qaeda.

During a speech at the United Nations, Powell presented intelligence that claimed Iraq had weapons of mass destruction with the ambition to produce more.