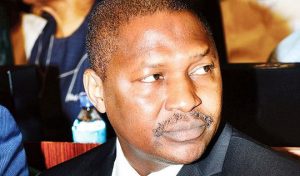 The Federal Government has accused the leader of the proscribed Indigenous People of Biafra (IPOB), Nnamdi Kanu, of using Radio Biafra to instigate violence that led to the death of at least 175 security personnel and several other citizens.

Attorney-General of the Federation (AGF) and Minister of Justice, Abubakar Malami, made the allegation at a news briefing in Abuja on Friday.

He alleged that Kanu also used the online station to incite members of the group to commit violent attacks against civil and democratic institutions across the country, especially in the South East.

According to Malami, such assaults include attacks on security personnel, police stations, security formations, and the destruction of properties of the Independent National Electoral Commission (INEC) and private citizens.

He added that Kanu also played a role in the violence recorded during the EndSARS protests in 2020.

“The EndSARS protests of October 2020 played into the sinister plans of Nnamdi Kanu, whereby he seized the protests through subversive and inciting online broadcasts and actively commanded and directed attacks on security personnel and facilities,” Malami said.

“As a result of these broadcasts, members of IPOB attacked and killed security personnel and burnt down Police stations, Correctional centres, INEC offices, bus terminals, the Palace of Oba of Lagos, Banks, hospitals, shopping malls and vehicles, amongst others.”