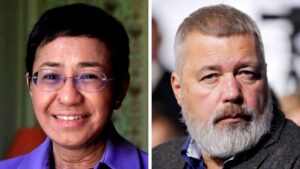 Journalists Maria Ressa and Dmitry Muratov won the Nobel Peace Prize on Friday for their fight to defend free expression in the Philippines and Russia.

Ressa is the co-founder of the investigative digital media company Rappler, which has focused on the brutal war on drugs waged by Philippine President Rodrigo Duterte.

Muratov is a co-founder and the editor-in-chief of Novaya Gazeta, an independent newspaper holding power to account in President Vladimir Putin’s increasingly authoritarian Russia.

The Norwegian Nobel Committee said it recognized the pair for their “efforts to safeguard freedom of expression, which is a precondition for democracy and lasting peace.”

Reacting to the news, Ressa told a live broadcast by Rappler, “I am in shock.”

She has been at the forefront of documenting Duterte’s war on drugs, which Human Rights Watch says has led to the deaths of more than 12,000 Filipinos, some 2,500 killed by police.

As editor of Novaya Gazeta, Muratov leads a rare independent news source in Russia. His journalists have faced harassment and threats, and six of them have been murdered, including Anna Politkovskaya, who was shot dead in her Moscow apartment building in 2006.

“Despite the killings and threats, editor-in-chief Muratov has refused to abandon the newspaper’s independent policy,” the Nobel Committee said in a statement.

He told the Russian news agency Interfax that he would donate his prize money to the treatment of children with spinal muscular atrophy, as well as investing it in journalism.

He also paid tribute to the paper’s journalists who have been killed. “This award is for our deceased colleagues, friends and journalists of this very newspaper,” he said.