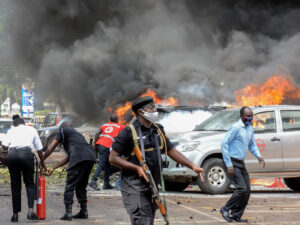 “Two suicide bombers were clearly captured (by security cameras) on motorcycles, two motorcycles. They were disguised as boda boda riders (motorcycle taxi drivers). They detonated the bombs they were carrying on themselves. That killed them instantly.”- Fred Enanga, Ugandan police spokesman has said.

The explosions occurred in the central business district of Kampala near the central police station and the entrance to parliament, police said.

“What we can say (is) this was an attack but who is responsible is a matter that is under investigation,” Uganda’s Assistant Inspector General of police Edward Ochom told AFP.

“Following the unfortunate and cowardly act of terrorism, our health workers are working around the clock to save lives of those injured,” he said.

The explosion near the police station shattered windows while the one near the entrance to parliament saw cars parked nearby burst into flames, Ochom said.

The twin attacks follow two blasts last month — a bus explosion near Kampala that wounded many people and a bombing at a roadside eatery in the capital that killed one woman.

Police said last month both those attacks were connected and were carried out by the Allied Democratic Forces (ADF) which the United States has linked to the Islamic State group.