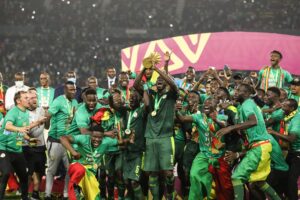 Sadio Mane scored the winning spot-kick – after missing one in the opening minutes of the game – as Senegal claimed their first Africa Cup of Nations title with a 4-2 penalty shoot-out victory over seven-time winners Egypt.

Mane had seen Mohamed Abou Gabal save his seventh-minute penalty at the Olembe Stadium in Yaounde but Egypt could not capitalise as they went all the way to extra time for the fourth consecutive game at this Cup of Nations.

Salah was due to step up to take Egypt’s fifth penalty but with Mohamed Abdelmonem hitting the post and Mohanad Lasheen having his kick saved by Edouard Mendy, the Liverpool star did not get his chance and was already on the verge of tears as his club team-mate Mane prepared to strike the decisive blow.

After two previous final defeats, Senegal are Cup of Nations winners at last, while Egypt missed out on a record-extending eighth continental crown that would also have been a first for Salah.

Senegal’s celebrations followed a disappointing final, the fifth in the last 11 editions of the tournament to be decided in a shoot-out after a goalless draw.