Protesters Storm Jonathan’s Abuja Office, Ask Him To Run In 2023 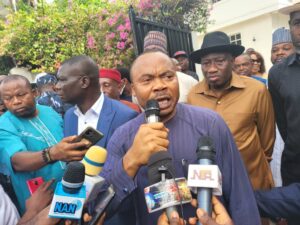 Protesters this Friday stormed the Abuja private office of former Nigerian President, Goodluck Jonathan urging him to declare to run in the 2023 presidential race.

The group made up of men, women and youths stormed the office with posters and leaflets demanding that the former President joins the race.

This comes about 10 months before the general elections are to be conducted by the Independent National Electoral Commission (INEC).

INEC has said the presidential election would take place on February 25, 2023, in line with the provisions of the Electoral Act.

A spokesman for the group, Mayor Samuel, who is also the convener of the Youth Compatriots of Nigeria said : “We were deceived and brainwashed by those who claimed they could do it in 2015.

“Now, we know better, under Jonathan the minimum wage could buy one or two bags of rice. What do we have today? We are begging President Jonathan to forgive us, we have realized our mistakes, we want him back to complete what he started.

Responding to them, Jonathan asked Nigerian youths to show greater interest in the nation’s political process.

He said : ” I am aware that you arenhere to ask me to declare  but I cannot declare because some processes are still ongoing.

“Yes you are calling me to come and declare for the next election, I cannot tell if I’m declaring. The political process is ongoing, just watch out. The key role you must play is that Nigeria must get somebody that will carry young people along.”