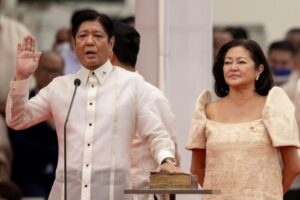 Ferdinand Marcos Jr, the son and namesake of the Philippines’ late dictator, has been sworn in as the country’s new president.

Marcos Jr., 64, won a landslide victory during the May elections. More than 30 million votes were cast for him, making Marcos the first presidential candidate to obtain a majority since the revolution that ousted his father 36 years ago. His election suggests a continued preference for populist leaders among Filipinos — who were governed for the past six years by the tough-talking Rodrigo Duterte, best known internationally for a war on drugs that has left thousands dead.

Known as “Bongbong”, the 64-year-old Marcos Jr won a rare landslide victory in last month’s presidential election, helped by what critics have said was a years-long campaign to whitewash his family’s image.

He succeeds Rodrigo Duterte, who gained international notoriety for his deadly drug war and has threatened to kill suspected dealers after he leaves office.

The new president, in a speech that echoed his campaign slogans of unity, promised to take the country far on his watch with policies benefiting everyone, and thanked the public for delivering what he called “the biggest electoral mandate in the history of Philippine democracy”.

“You will not be disappointed, so do not be afraid,” he said at the inauguration ceremony, surrounded by his immediate family and with his sister Imee, a senator, and 92-year-old mother Imelda, a former four-time congresswoman, seated close by.