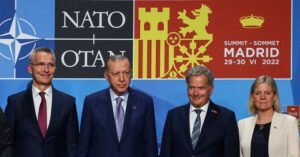 NATO leaders on Wednesday formally invited Finland and Sweden to join the alliance, one day after Turkey dropped its objections to their membership.

The decision will now go to the 30 member states’ parliaments and legislatures for final ratification. NATO’s leaders said they expected the process to move quickly, allowing for an unprecedentedly swift accession and a show of unity against Putin.

The Kremlin has been surprisingly quiet about its thoughts on the two countries joining the alliance, given its loud opposition to Ukraine ever becoming a member of NATO before Russia invaded February 24. Russian President Vladimir Putin said May 14 the NATO accession would harm Russia’s relationship with Finland and Sweden, but clarified two days later he has “no problems” with the countries.