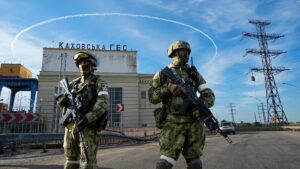 Pro-Russia officials have sentenced to death two British men and a Moroccan national captured while fighting in the Ukrainian army in Mariupol.

A court in Russian-controlled east Ukraine convicted Aiden Aslin and Shaun Pinner after a days-long process that observers have called a “show trial” on “trumped-up charges” meant to imitate war crimes trials against Russian soldiers in Kyiv.

Aslin, 28, from Newark, and Pinner, 48, from Watford, were convicted by the court in Russian-controlled territory in Donetsk alongside Saaudun Brahim on charges of “terrorism”.

Both Britons have said they were serving in the Ukrainian marines, making them active-duty soldiers who should be protected by the Geneva conventions on prisoners of war. However, Russian state media has portrayed the men as mercenaries, and the court has convicted them on the charge of “being a mercenary”.

Russia is believed to be using the process in part to put pressure on the UK and may seek a prisoner exchange for Russian soldiers convicted of murder and other war crimes during Russia’s invasion of Ukraine. There is a moratorium on the death penalty in Russia, but not in the territory it occupies in eastern Ukraine.

Ukraine has given three Russian soldiers prison sentences for war crimes tied to the Russian offensive that began on 24 February. Vadim Shishimarin, 21, was sentenced to life in prison on 23 May for killing a 62-year-old civilian in Ukraine’s north-eastern Sumy region early in the war. On 31 May Alexander Bobikin and Alexander Ivanov were each sentenced to more than 11 years in prison for shelling attacks on population centres that “violated the laws and customs of war”.