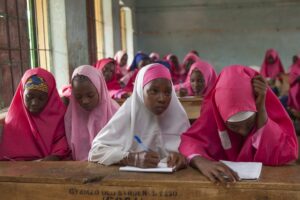 The Supreme Court has set aside, the restriction the Lagos state government placed on the use of hijab by female Muslim students in its public primary and secondary schools.

In a split decision of a seven-man panel of Justices, of five to two, the Apex court affirmed the earlier decision of the Lagos Division of Court of Appeal, which nullified a High Court judgement that banned female students from wearing Hijab with their school uniforms.

The court, in its lead majority verdict prepared by Justice Kudirat Kekere-Ekun but read by Justice Tijani Abubakar, dismissed as lacking in merit, an appeal Lagos state government lodged against the Court of Appeal decision.

The Supreme Court said it found no reason to reinstate the October 17, 2014 judgement by Justice Grace Onyeabo of the High Court of Lagos State, which upheld the ban on Hijab.

Wild jubilation greeted the verdict with the Amir (President) of the Muslim Students’ Society of Nigeria, Lagos State Area Unit, Miftahudeen Thanni, and other members of the organisation seen shouting “God is great”.