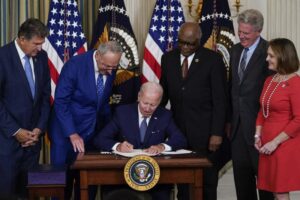 President of the United States, Joe Biden on Tuesday signed into law a big climate change and health care spending bill, giving Democrats another boost ahead of midterm elections.

The legislation includes the most substantial federal investment in history to fight climate change — some $375 billion over the decade — and would cap prescription drug costs at $2,000 out-of-pocket annually for Medicare recipients. It also would help an estimated 13 million Americans pay for health care insurance by extending subsidies provided during the coronavirus pandemic.

The measure is paid for by new taxes on large companies and stepped-up IRS enforcement of wealthy individuals and entities, with additional funds going to reduce the federal deficit.

“A nation can be transformed. That’s what’s happening now,” Biden said in a White House speech likely to form the basis of his campaign ahead of the November polls, where Republicans have hoped to end Democrats’ narrow control of Congress.

“It’s about tomorrow,” Biden said. “It’s about delivering progress and prosperity to American families. It’s about showing America and the American people that democracy still works in America.”

With Biden’s approval rating lagging, Democrats are hoping that the string of successes will jump-start their chances of maintaining control in Washington in the November midterms. The 79-year-old president aims to restore his own standing with voters as he contemplates a reelection bid.