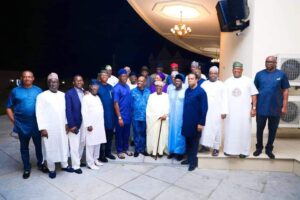 The camp of Governor Nyesom Wike in the Peoples Democratic Party has officially announced its withdrawal from participating in the presidential campaign of the party for the 2023 elections.

The group made its position known after a long meeting which started at about 7pm last night and ended by past 2am this morning at the private residence of Wike in Port Harcourt, the Rivers State capital.

The Wike camp insisted that they will not be part of the Atiku campaign activities pending the resignation of the party’s National Chairman, Iyorchia Ayu.

The aggrieved members vowed not to associate with the party’s campaign activities for Atiku until Ayu’s matter on resignation was settled.

The decision of the Rivers governor’s camp comes some days to September 28, the official date for candidates to kick-off campaign set by INEC,