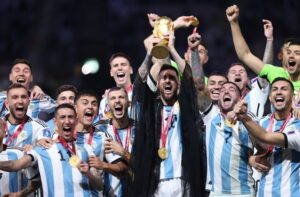 Argentina won its third World Cup title by beating France 4-2 in a penalty shootout after a 3-3 draw featuring two goals from the 35-year-old Messi and a hat trick by France forward Kylian Mbappé.

Angel Di Maria won a penalty after Ousmane Dembele fouled the winger in the penalty box, which Messi comfortably converted past Hugo Lloris. Di Maria then added a second after slotting the ball home from close range following a brilliant passing move from Argentina.

Mbappé did all he could to emulate Brazil great Pelé as a champion at his first two World Cups. Even scoring the first hat trick in a final since Geoff Hurst for England in 1966. But his hat trick was not enough for France to win the game. The match ended 3-3 after extra time and went into a penalty shoot-out.

“It’s just crazy that it became a reality this way,” Messi said. “I craved for this so much. I knew God would bring this gift to me. I had the feeling that this (World Cup) was the one.”