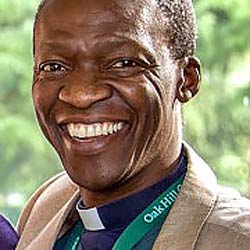 A Nigerian, Dr Woyin Karowei Dorgu has made history as the first Black man to be appointed bishop by the Church of England in 20 years. Indeed, in recent memory, he is the second Black man, elevated to that position after Uganda-born John Sentamu who was consecrated 20 years ago.

The above however is not the only interesting thing about Dorgu. The other thing is that as a teenager, he kicked the gospel and left the church altogether. He told the Guardian of London that even after being raised in a Christian family, he rebelled against the gospel and quit going to church.

It was at the University of Lagos where he read medicine that he encountered Christian students who influenced his decision to “accept Jesus as my personal saviour and Lord in my early 20s.”

Woyin Karowei Dorgu studied medicine at the University of Lagos. He went to the United Kingdom in 1987 and became a priest of the Church of England (the UK’s equivalent of the Church of Nigeria Anglican Communion).

Dorgu will be the 13th Bishop of Woolwich which is in South–east London (an area that has a high population of Nigerians). However, and according to the Guardian’s Harriet Sherwood, most of the Nigerian residents of the Woolwich area worship in Black-majority Pentecostal churches.

Dorgu will be consecrated at Southwark Cathedral on March 17. He told the Guardian that his appointment was “a small step in the right direction.” And he added: “Quite a lot of Nigerian Christians (in the Woolrich area) are from an Anglican background. I hope my appointment will be a model. Seeing someone from a similar background could be a catalyst for dialogue between the C of E (Church of England) and Black majority churches and Nigerians looking for a spiritual home.”