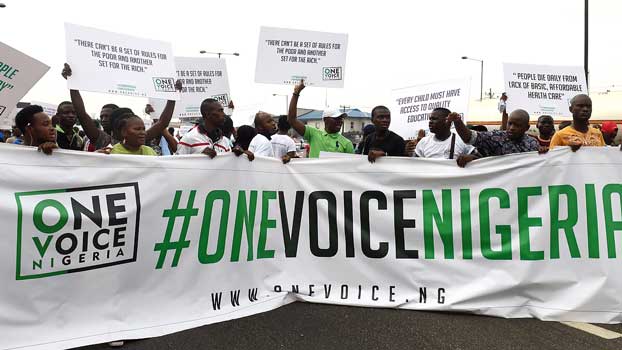 Many Nigerians today went to the streets to protest the policies of the government of President Muhammadu Buhari. Significantly, it was the first protest of its nature and magnitude that the incumbent government would experience since it came to power in May 2015.

From Lagos to Abuja, Ibadan, Uyo and Benin, protesters expressed anger and disappointment over the high cost of daily living and sundry other hardships Nigerians are experiencing under the APC-led Federal Government.

The protests apparently defied fears expressed in many quarters that law enforcement would crack down on them. Even the reported disapproval of the Nigeria Police headquarters in Abuja did not stop people from marching. Surprisingly, the prime mover of the protests, acclaimed singer Tuface Idibia, withdrew his participation and even pronounced them cancelled a day to the scheduled date of February 6 due to what he called “ security threats.”

Alas! Many Nigerians were discouraged by the singer’s withdrawal but the protests still held with varying degrees of success.

The Lagos march was led by the popular and eccentric musician, Charley Boy, comedian, Seyi Law and Sahara Reporters Publisher, Omoyele Sowore. Other notables in the protest were Yomi Fabiyi and Moremi Ojudu.

Lagos State Commissioner of Police, Fatai Owoseni led a police contingent apparently to provide security since there was no ugly incident between them and the protesters. The Lagos march began at the National Stadium in Surulere and terminated at the National Theatre in Iganmu.

In Abuja, people, both young and old came out en-masse, not minding the scorching sun. The Abuja protesters carried elaborate placards some which read: “Where is our President?”, “The prize of a bag of rice has risen from N8,500 to N22,000,” “Religion, ethnicity or what part of the country I live shouldn’t determine the type of protection I get from my country.”

However, police stopped the anti-government protesters from reaching the Presidential Villa in Abuja. The protesters, who marched from the Unity Fountain in Maitama District, chanting songs and displaying placards as they headed towards the upscale Asokoro District, were barricaded by a team of heavily-armed anti-riot police personnel who denied them entry into the villa.

In a related development, APC Chieftain, Asiwaju Bola Ahmed Tinubu has said that Nigerians should be patient with the APC-led government. He stated this while addressing journalists and protesters led by Moremi Ojudu, the outspoken daughter of President Buhari’s Special Adviser on Political Matters, Senator Babfemi Ojudu.

He said he was not denying the fact that Nigerians are suffering and have the right to protest. He stated that the party and the economy needed to be re-tuned.

In Uyo, the Akwa Ibom State capital, the protests started from the famous Ibom Plaza with protesters bearing placards and chanting songs of solidarity. Protests were also successfully led in cities like Benin and Ibadan.

The story was however different in Rivers State as the protest was halted by the police. Expressing his displeasure over the stoppage, an aggrieved protester said: “If they can provide security against protest, why can’t they provide security for the populace?”