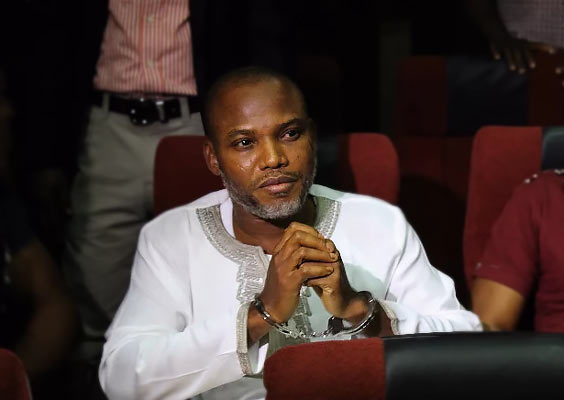 A Federal High Court sitting in Abuja, this Tuesday granted bail to the detained leader of the Indigenous People of Biafra (IPOB), Nnamdi Kanu on health considerations.

Delivering ruling on the bail application, Justice Binta Nyako said Kanu is expected to provide three sureties, one of who must be a serving senator, a Jewish religious leader or a highly respected person with land anywhere in the Federal Capital Territory. Each surety will however be carrying a bail bond of N100 million.

The IPOB leader was ordered not to be at any gathering comprising more than 10 persons and also not to grant any press interviews  pending the determination of his ongoing trial.

Justice Nyako who denied  the other accused persons bail, warned that Kanu’s bail will be revoked if he flouts any of the orders, as one of the charges against him which is treasonable felony, is a serious offence against the state.

Few minutes after the judgment, Nnamdi Kanu, along with the other accused persons were taken away in a green Prisons vehicle escorted by four black Toyota Hilux vans.

Among those present at the court’s proceedings were Ekiti State governor, Ayodele Fayose, who wore an Igbo cap to support Kanu whom he described as a “Nigerian who was being treated unjustly for no reason.”