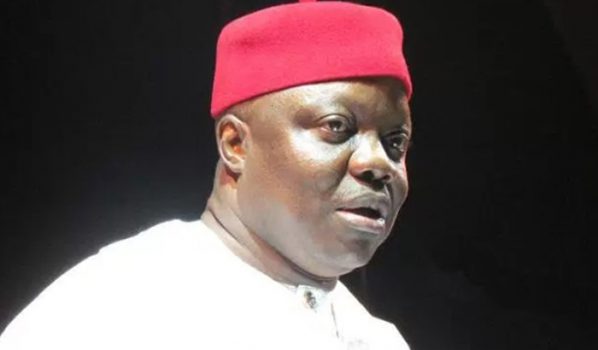 The immediate past governor of Delta State, Dr. Emmanuel Uduaghan has officially dumped the opposition Peoples Democratic Party for the ruling All Progressives Congress .

According to a statement which he made available to newsmen on Wednesday, Uduaghan disclosed that many other leaders of PDP in Delta State were also ready to join him in APC.

In the statement titled ‘Moving On To The Bigger Playing Field’, the former governor said his mission was to ensure that his new party takes over Delta State as well as deliver President Buhari’s second term bid, particularly in the Niger Delta region.

Uduaghan further noted that despite  Buhari’s inability to score the required 25 per cent in the 2015 election in the region, he has given direct focus to the development of the region.

He said having played a key role in the cessation of hostilities in the once restive Niger Delta region while serving as governor, he would support any government that was doing its best to solve the myriad of problems confronting the region.

“Since the inception of the current All Progressives Congress, APC, administration at the federal level, there has been an encouraging interest and activities by President Muhammadu Buhari to bring a permanent solution to the Niger Delta crisis.

“This has pointed in a direction that is at once progressive and developmental. Topmost in these activities are the ‘Engagement Processes.’ Rather than using the military to harass our people, the Buhari administration has embarked on various engagement processes that have led to agreements and brought hope to the people of the Niger Delta.

“Very significant is that Mr. President mandated the Vice President Prof Yemi Osinbajo SAN, to visit virtually all the oil producing states, engaging various stakeholders. This is unprecedented in the history of the region.

“Such engagement processes have brought some measure of peace in the Niger Delta. Things can only get better,” the statement read.

Uduaghan, who would be contesting the Delta South Senatorial District in 2019 called on leaders in region to support efforts being made by the present administration to bring lasting peace to the Niger Delta.

He continued: “In this era of partisan politics, it is necessary for the people of the Niger Delta, and Delta State in particular, to identify more with the Federal Government led by the APC.

“By so doing, we can push some of the agreements between our leaders and the Federal Government through, and also engage the government to do more. Politics is about interests.

“The Niger Delta is a major area of interest for me, because I staked my life going into the creeks severally without security and sometimes coming back at night negotiating peace. I will, therefore, give the strongest support to any President that shows commitment in the affairs of the Niger Delta.

“I call on, and enjoin other well-meaning leaders in the region who have very useful contributions to make, to come on board and join hands in helping this Federal Government to pursue a robust development agenda that would uplift our people.

“Whatever milestone that appears not to have been achieved yet is not for lack of efforts. Joining hands with and supporting the process will lead to a faster delivery on expectations.

“It is in the pursuit of this noble objective that I’m offering myself to help drive a process that would give the lives of our people in the Niger Delta more meaning.

Uduaghan thanked leaders and members of his former party for urging him to stay, saying that he prayed fervently for divine direction before agreeing to leave the PDP where he served as commissioner, Secretary to the State Government and as a governor for two terms.

“I have, therefore, after series of consultations and prayers, taken the decision to leave the PDP and join the APC. In doing this, I want to thank the numerous leaders, supporters and interest groups that have been urging me to remain in PDP.

“I am happy that after explaining some of the deeper issues to you, some of you that are politicians have agreed to join the APC in the near future. So I am going into APC as “John the Baptist” to the numerous Deltans that are coming in, soon – very soon,” he added.