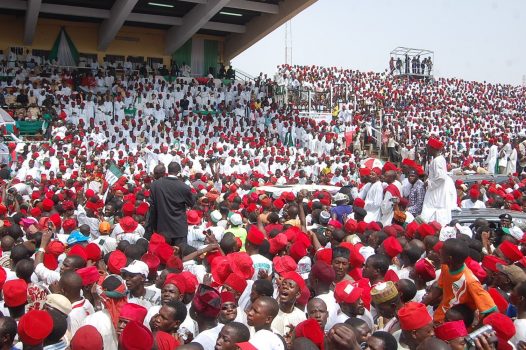 About 5,000 members of the Kwankwasiyya group in Kebbi State on Tuesday dumped the opposition Peoples Democratic Party (PDP) and defected to the All Progressives Congress(APC).

Kwankwasiyya is the political structure of Senator Rabiu Kwankwaso who represents Kano Central Senatorial District in the National Assembly. Kwankwaso was also one of those who lost in the recent presidential primaries of the PDP.

Members of the group were received at the APC Secretariat in Birnin-Kebbi, the state capital on Tuesday by the Deputy Governor of the state, Alhaji Samaila Yombe.

Speaking on behalf of the defectors, the group’s former State Organizing Secretary, Abdullahi Nayalwa said they took the decision because of the landmark achievements of President Muhammadu Buhari and Governor Abubakar Bagudu in agriculture and other sectors.

Nayalwa said: “We have finally dumped PDP and joined APC because APC administration is the only government that can bring change and unity in the country. We have gone to the market and the market was not favourable.

“We decided to return home with over 5,000 of our members and more are coming by God’s grace.”

In his response, the Deputy Governor commended them for taking the right and timely decision to return to the ruling APC, assuring them of equal treatment as they work towards achieving victory for the party in 2019.