Obaseki Insists He Will Not Issue Fresh Proclamation For Edo Assembly 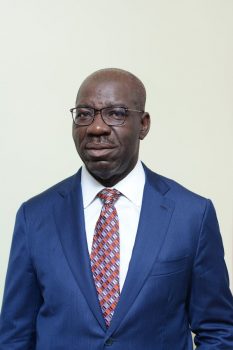 Edo State Governor, Godwin Obaseki on Monday insisted that he will not issue a fresh proclamation for the inauguration of Edo State House of Assembly as demanded by the House of Representatives.

The House had last week called on the governor to issue a fresh proclamation within one week in line with section 105(3) of the constitution of the Federal Republic of Nigeria, 1999 (as amended) for a proper inauguration of the state’s Assembly.

The lawmakers also ordered the Inspector-General of Police (IGP) and the Director-General of the Department of State Services (DSS) to seal off the Edo State House of Assembly complex until a proper inauguration is conducted.

However, speaking journalists on Monday, Obaseki who spoke through his Special Adviser on Media and Communication Strategy, Crusoe Osagie said his duty as regards the inauguration of Edo State House of Assembly ended with the first proclamation.