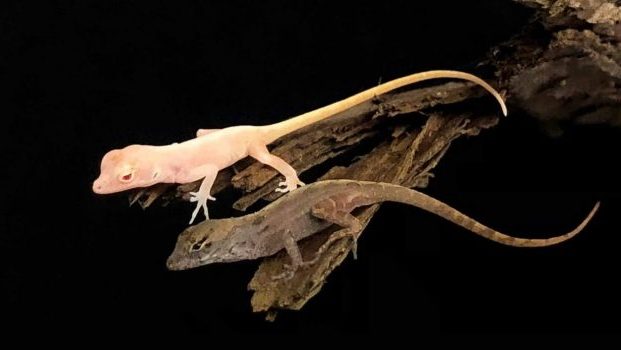 In a major research breakthrough, scientists have evolved a gene-edited albino reptile which could help cure eye conditions in humans.

The lizard, roughly the size of an index finger was made to resemble humans with albinism who often have vision problems. The scientists involved in the project hope to use the lizard as a model to study how the loss of the relevant gene impacts the development of the retina.

The reptile was developed using a technique which had previously been thought impossible to use on reptiles because it required chemical reagents to be injected directly into newly fertilized eggs.

University of Georgia professor, Doug Menke and his research team identified a solution when they noticed that the membrane covering a lizard’s ovary is transparent, allowing them to see all of the developing eggs and work out which were next to be fertilized.

Reagents were then injected into the eggs waiting to be fertilized and after a three-month wait for the baby lizards to hatch, the operation proved successful.

Writing in the journal, Cell Reports,  Menke said: “We had to wait three months for the lizards to hatch, so it’s a bit like slow-motion gene editing.

“But it turns out that when we did this procedure, about half of the mutant lizards that we generated had gene-editing events on the maternal allele and the paternal allele.”

“The results of the experiment suggested that the reagents remained active for several days or even weeks within the unfertilized eggs, with between 6% and 9% of cells in the ovary producing offspring with signs of gene-editing.

“Relative to the very established model systems that can have efficiencies up to 80% or higher, 6% seems low but no one has been able to do these sorts of manipulations in any reptile before.

“There’s not a large community of developmental geneticists that are studying reptiles, so we’re hoping to tap into exciting functional biology that has been unexplored,”  Menke added.

Menke said looking further ahead, the gene-editing technique could also be translated for use in other animals.