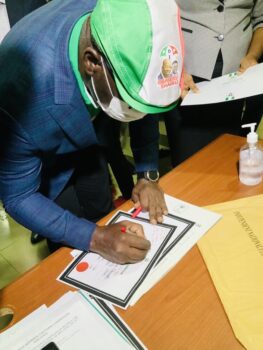 The National Commissioner, INEC in charge of Edo, Rivers, and Bayelsa States, Mrs May Agbmuche-Mbu made the presentation on Tuesday at the INEC office in Aduwawa, Benin City, the Edo State capital.

Governor Obaseki and the Peoples Democratic Party were returned elected by INEC after polling the highest number of votes in the September 19 gubernatorial election.

The governor secured 307,955 of the total votes cast, defeating his closest rival, Pastor Osaze  Ize-Iyamu of the All Progressives Congress who got 223, 619 votes.