Protesters this morning brought vehicular traffic on the Lagos–Ibadan Expressway to a complete standstill as they barricaded both sides of the expressway in front of the premises of Punch Newspapers.

On the Lagos outward Ibadan side of the road, an articulated truck or trailer was used to block the road while other assorted objects halted vehicular traffic on the other side.

As at the time of filing this report, protesters were playing music and dancing on the expressway. A commuter, Mr Felix Oboh told People&Power that he and other travellers had spent three hours on the spot.

As at 12.00noon, the only vehicular movement towards Ibadan observed was by motorists who were squeezing their way through the untarred side of the road rather dangerously.

Movement towards Lagos as at 12.00noon was easing gradually although the queue was still up to a kilometer long. 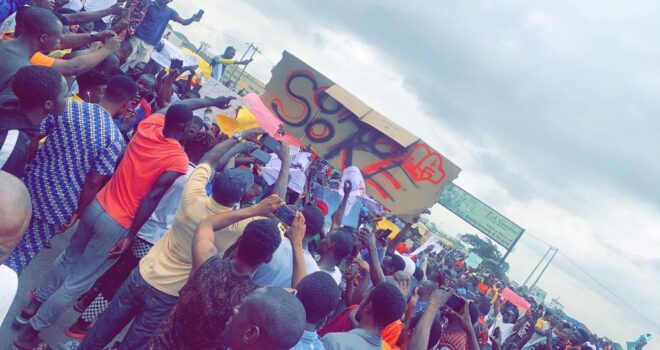 Nigerians have been on the streets for nine consecutive days protesting an end to Police brutality and extra-judicial killings.