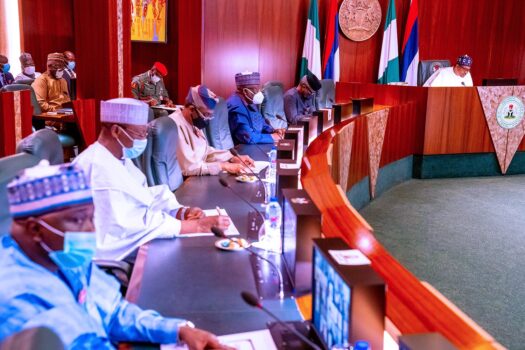 The National Executive Committee of the All Progressives Congress has extended the tenure of the party’s Caretaker Extraordinary Convention Planning Committee led by Governor Mai Buni by six months.

The NEC, which had President Muhammadu Buhari in attendance, also approved the dissolution of party organs from the smallest organ at the ward to national offices.

These were part of the five resolutions unanimously reached at the NEC meeting of the ruling party and disclosed to State House Correspondents by governors Nasir El-Rufai (Kaduna), Rotimi Akeredolu (Ondo), Hope Uzodinma (Imo), and Secretary of the CECPC, Sen. John James Akpanudoedehe.

The meeting, which was held at the Executive Council Chambers of the State House, also approved the expulsion of the former National Vice Chairman, South-South, Mr Hillard Etta, for violating NEC instruction.

Buhari appealed to party members at all levels to make sacrifices that will move the party forward. The President said, “I want to appeal to all our party members and leaders at all levels, to try and make the required sacrifices so that we are able to collectively restore our progressive and democratic political party, which can nurture and give expression to our collective dream of building a strong, united and developed Nigeria.

“May I use this opportunity to remind all of us of the need to recreate our negotiation secret of 2012, 2013 under our legacy parties. What guided our success to achieve the merger that produced the APC was the respect we were able to have for each other.

“In those times, decisions reached at both formal and informal consultations were respected with trusted initiatives taken and believed that they were needed to produce the required political platform that could guarantee electoral victory.

“Everyone of us as leaders ensured that those decisions were respected. I have through consultations of the caretaker committee and other leaders of the party, agree that our challenges in the party require that we take steps to rebuild the party from wards to national levels.

“The responsibility of our party’s NEC at this meeting is to adopt and dispassionately consider all proposals submitted by the caretaker committee and grant all the necessary approvals requested to rebuild the party.”

Mahmood Yakubu Sworn In For A Second Term As INEC Chairman