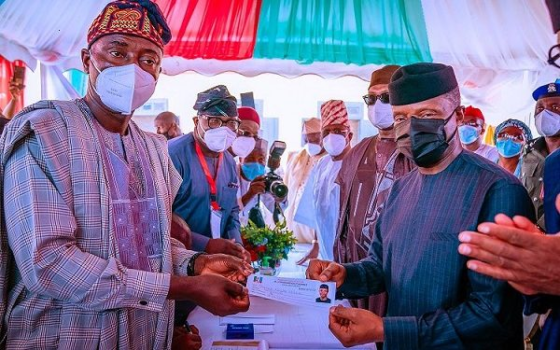 Vice President Yemi Osimbajo on Tuesday, joined other party members to revalidate his membership of the All Progressives Congress [APC]. Alongside the Vice President for the exercise were Governor Dapo Abiodun and former Governor Olusegun Osoba.
The Vice President, who was in Ikenne, Ogun State, for the exercise, described Ikenne as ”my hometown and more importantly, the hometown of Papa Obafemi  Awolowo, the father and progenitor of the great movement that that we call the progressives today”
The membership registration and revalidation exercise of the ruling APC in Ogun State was flagged off by the Vice President at his country home in Ward 1, Unit 3, Egunrege in Ikenne, Ikenne Local Government.

Osinbajo, accompanied by the Niger State governor and the National Chairman of the APC Registration and Revalidation Committee, Abubakar Sanni Bello, was received at the Mayflower Secondary School, Ikenne by the Ogun state governor, Dapo Abiodun, the National Leader of the party, Olusegun Osoba, the Southwest Team Leader of the Committee, Senator Lawan Shuaib and other top members of the party.

The Vice President headed straight to Ward 1, Unit 3, Egunrege Poling Unit, Ikenne, where his membership was revalidated by the ward chairman, Segun Awomuti.