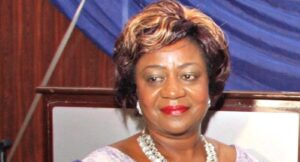 The leaders were demanding the immediate reversal of President Muhammadu Buhari’s nomination of Lauretta Onochie as National Commissioner of the Independent National Electoral Commission (INEC).

Lauretta Onochie is currently the media aide to President Buhari on Social Media.

Secondus said Onochie being a card-carrying member of the All Progressives Congress (APC) cannot be appointed into a position that requires a high level of neutrality.

He urged the National Assembly leadership to impress it on President Muhammadu Buhari to immediately withdraw her nomination.

Buhari, earlier in October, wrote to the Senate to confirm the appointment of one of his media aides, Lauretta Onochie, and three others as Commissioners of the Independent National Electoral Commission (INEC).