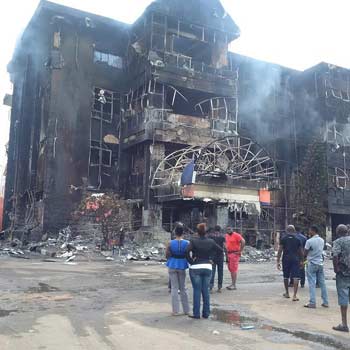 Popular Benin-City Phil-Hallmark supermarket was on Sunday morning razed down by fire. The cause of the fire which is said to have started in the early hours of Sunday is yet to be established. Eyewitnesses have however said that the fire broke out several hours after it closed for business on Saturday night.

Phil-Hallmark located on Sapele Road is easily the biggest shopping mall in Edo State. The centre had ultra-modern facilities including security cameras and ATM machines. Usually guarded by armed policemen, the supermarket enjoyed the patronage of both Nigerians and foreigners.

The shopping mall which had four floors had different, well-stocked sections. It stocked groceries, complemented by a bakery. It had an elaborate boutique and a state-of-the-art home appliances section.

Phil-Hallmark was generally believed to be a multi-billion naira investment. It was one of the greatest spots of attraction in Benin-City. Its staff strength, according to some sources, was up to 100. What is more! The shopping mall was only recently given a comprehensive renovation.

Fire-fighters from the Nigerian Air Force and the University of Benin reportedly battled the fire on Sunday morning. However, the damage done was already devastating.