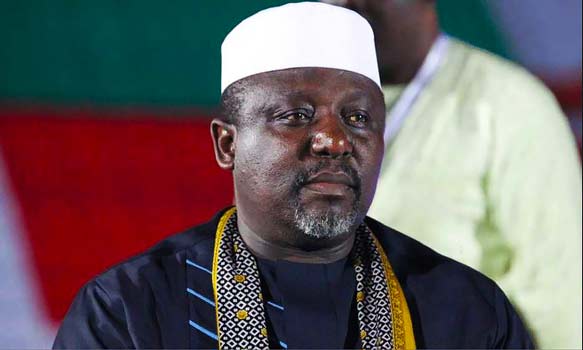 Imo State Governor, Owelle Rochas Okorocha who is the only governor elected on the platform of the APC in the South East has said the Igbos have been grossly marginalized at the Federal level by the APC government led by President Muhammadu Buhari.

Okorocha, widely known across Nigeria to be one of the staunchest defenders of the Buhari administration, dropped the bombshell while playing host to Acting President Yemi Osinbajo who was on official visit to Imo State as part of his assessment tour of oil producing states of the Niger Delta (a part of Imo State also produces oil)..

Dispensing with partisan considerations, the Governor lamented that the South East has been shortchanged in the areas of allocation of Federal Government projects and political appointments.

“We have nothing to show that we are part of the Nigeria project, neither do we have any sense of belonging in the present government at the national level,” he said.

He added that in spite of all the sacrifices the state made to ensure that the APC had a good run in the last elections, all she has to show for it is a Minister of State slot in the Federal Government. He lamented that  numerous qualified sons and daughters of the region who should be considered for serious appointments were unemployed.

Okorocha claimed he had previously laid the complaints to President Buhari and went on to express the hope that the feelings and grievances of the Igbo would be conveyed to the appropriate quarters.

Responding, Osinbanjo noted that Katsina State, the home state of the incumbent President, can only boast of Ministers of State in terms of appointments. He however said that the oil-bearing communities in the state had been mistreated and neglected. He assured that the government would make amends in due time.

As he put it: “My visit here is in continuation of consultations with all the states of the Niger-Delta as directed by Mr. President, and I can say that the oil producing communities in Imo State have been largely ignored and this will be appropriately redressed.”