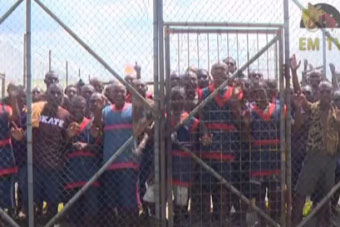 Seventeen inmates from the Buimo Prison in the city of Lae in Papua New Guinea have been killed during a mass prison break on Friday.

According to Lae Metropolitan Police, apart from the 17 prisoners that were shot dead, three were captured while 57 others were still on the run after the mass break from the overcrowded prison located nearly 320km from the capital, Moresby.

Friday’s incident would be the third mass breakout from the Buimo Prisons in less than four years.

In 2013, 44 inmates escaped after a jail break while another 55 prisoners fled the same facility two years later. In February last year, 11 prisoners were killed in an attempted escape after  the prison wardens and guards were attacked by over 30 inmates.