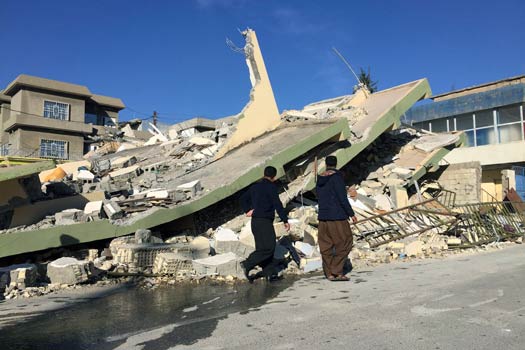 Iran’s state-run news agency, IRNA says the  death toll from the powerful earthquake that hit the Kermanshah Province on the Iran-Iraq border has risen to 450.

IRNA said the magnitude 7.3 quake which was centred 31 kilometres outside the eastern Iraqi city of Halabja killed people mostly from the town of Sarpol-e-Zahab.

The quake was felt as far west as the Mediterranean coast but wreaked major havoc in Kermanshah province which sits in the Zagros mountains that divide Iran and Iraq, where a majority of the residents rely mainly on farming to make a living.

The Provincial Deputy Governor of Kermanshah, Mojtaba Nikkerdar had earlier told state television that about 129 were killed but expressed fear that the toll may rise as several people were still trapped under rubbles from collapsed structures.

“There are still people under the rubble. We hope the number of the dead and injured won’t rise too much, but it will rise,” Nikkerdar had said.