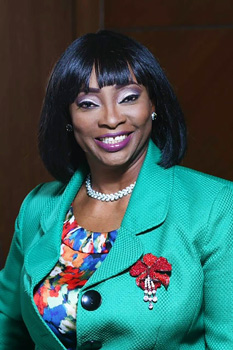 Mrs. Patience Oghogho Maseli can be best described as a seasoned geologist, an accomplished administrator, an achiever, a wonderful personality, a good manager of people and a proud family woman.

Pat Maseli as she is fondly called, attended the reputable St. Maria Goretti Girls Secondary School, Benin City in Edo State for her secondary education. For her Advanced Level,she attended Federal Government College, Warri in Delta State. She thereafter proceeded to the University of Benin, Benin City for her tertiary education and bagged a Bachelor of Science (BSc) Degree in Botany. She also holds a Master of Science (M.Sc) degree in petroleum geology from the University of Port Harcourt, Rivers State.

Following her graduation in 1982, she completed her National Youth Service within the Research & Development subsidiary of  theNigerian National Petroleum Corporation (NNPC). As a result of her performance and experience, in 1983, Mrs. Maseli was employed to work with the Petroleum Inspectorate arm of NNPC (Now Department of Petroleum Resources (DPR).

Through continuing hard work, she was promoted to the post of an Assistant Director in 2006 and was in charge of the Resources Management Branch within Upstream Division of DPR. This position she held until January 2014 when she made the exciting move to the Exploration Branch of Upstream Division.

Alongside her new post, she doubled as the Coordinator of the National Data Repository (NDR) where all data in the oil and gas industry are kept in safe custody. She completely overhauled the NDR and raised it to world , standard. In June 2015, she was redeployed to be in charge of the Domestic Gas Obligation and Distribution Branch with the Gas Division of DPR, and progressed the development of the domestic gas business in Nigeria with much vigour.

Currently, Mrs. Patience Maseli is the Head of Upstream Monitoring and Regulating Division of the Department of Petroleum Resources.

In her role as a regulator, she has indeed contributed to the Petroleum Industry by initiating many measures to strengthen the regulatory environment in addition to working relentlessly in facilitating the work of operators and stake holders. Her vision and guiding principle has always been to provide service to clients effectively, efficiently, amiably and as user friendly as possible at the same time.

She has also represented Nigeria in many bilateral arrangements with foreign companies. Mrs. Maseli, between 2004 and 2012, was the team lead for the Nigerian-Norwegian Institutional Co-operation. DPR benefited immensely from their technical expertise in deep offshore development and establishment of the NDR.

She has contributed persistently to the development of DPR, both as a young officer and as a management staff. She nurtured the unitization of straddle fields in Nigeria which will further contribute to the development and production of the fields with the attendant increase in the nation’s reserves.

As a mentor and an Assistant Director, she has influenced the lives of many geoscientists, engineers and professionals within the oil and gas industry. She is the pioneer and first chairperson of the Women in Geosciences & Engineering (WIGE).

She has been a very active member of NAPE and Nigerian Mining and Geosciences Society, working conscientiously over the years in various committees and working groups. It is worthy to mention her fund-raising efforts for both associations. In 2015, she won the premier award of most hardworking conference planning committee member for NMGS. She also belongs to the American Association of Petroleum Geologists (AAPG).

Mrs. Patience Maseli has impacted lives through her generous disposition and philanthropic vision. Her passion for philanthropy and desire to help the needy has never been in doubt. She has been actively involved in improving the quality of lives of disadvantaged Nigerians by supporting their health care needs, providing educational support funds, supporting youth organization activities and women groups in the society. She has provided grant support for payment of medical bills, school fees and various gift items to the less privileged in the society.

Mrs. Maseli is a proud family woman, happily married to Paul Maseli, a Director at the United Nations and they are blessed with three children ( a pilot and two lawyers).

As the foremost Nigerian writer, Chinua Achebe noted in his bestselling novel, Things Fall Apart: “If a child washed his hands, he could eat with kings.” Mrs. Maseli indeed washed her hands and was admitted to be one of the distinguished Fellows of NAPE in 2016.

It is in recognition of her contribution to national development in the sphere of Public Service that Mrs. Patience Oghogho Maseli is deemed worthy to be conferred with the Woman of Merit Gold Award which is part of the 2017 PSR National Awards.