French And British Boats Clash In Channel Over Fishing Of Scallops 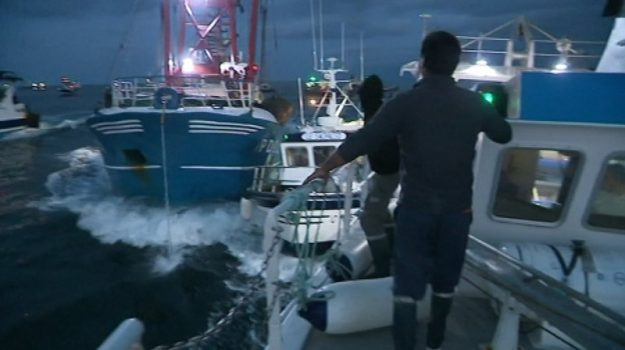 French and British fishermen have clashed in the English Channel in an escalating battle over scallops although no one was injured during the incident.

About 40 French boats tried to stop five larger British boats from fishing 12 nautical miles off the Normandy coast, located in the Seine Bay.

Reports say the fishing boats collided and stones were thrown during the clash.

British boats are entitled to fish in the scallop-rich area, but their presence has angered the French who accuse the British of depleting shellfish stocks.

Now UK fishermen are demanding government protection, while the French, who gathered overnight on Monday in protest against the so-called British ‘pillaging’ have berated the loss of their ‘primary resource’.

“The French went to contact the British to stop them from working and they clashed with each other,” said Dimitri Rogoff, head of the Normandy Fishing Committee.

The British were unable to match the local flotilla and were ultimately chased away. Two British boats, Golden Promise and Joanna C, returned to Brixham harbour with damaged windows.

A French local government spokesperson, Ingrid Parrot said: “Things were thrown on both sides – from the English and from the French. Both parties were extremely tense.”

Tension has rumbled for 15 years, but in the past five years a deal which allows larger British boats to stay out of the area in exchange for more fishing rights had prevailed.