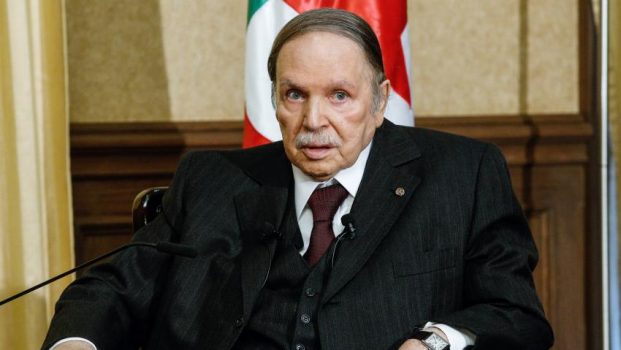 Celebrations and protests have continued to trail Tuesday’s resignation of ailing Algerian President, Abdelaziz Bouteflika whose bid to seek a fifth term in February sparked mass protests in the country.

Hundreds of jubilant Algerians took to the streets of the capital, Algiers after state media, APS announced the 82-year-old’s departure, capping a wave of protests demanding the removal of an aging elite seen by many as out of touch with ordinary people and presiding over an economy driven by cronyism.

Bouteflika’s supporters have however sought to stop the dissent by telling Algerians not to return to the dark days of the 90s when some 200,000 were killed in civil war, warning even of a scenario like the one in Syria which is embroiled in an eight-year-long conflict.

Bouteflika announced he was standing down in a one-sentence statement carried by APS followed by a letter, his primary means of communication since disappearing from public view after suffering a stroke in 2013.

“I have taken this step because I am keen to put an end to the current bickering. I have taken the suitable measures needed for the continuity of the nation’s institutions during the interim period,” Bouteflika said in the letter.

His departure came after the country’s Army Chief of Staff, Lieutenant General Ahmed Gaed Salah dramatically ratcheted up the pressure, demanding immediate action to declare him unfit for office under the constitution.

The military had stayed in their barracks during the protests but gradually increased pressure on Bouteflika’s camp, first indirectly in an army magazine saying the military shared the same vision as the people.

Bouteflika had on Monday said he would quit before the end of his term on April 28 without giving a date. He had also vowed to undertake unspecified measures for the sake of stability, triggering new protests by students demanding a new political system.

Pressure had been building with opposition groups demanding Bouteflika’s immediate resignation while hundreds of students marched through Algiers to demand the replacement of a political system widely seen as incapable of significant reform.

Bouteflika’s resignation puts Abdelkader Bensalah, Chairman of the Upper House of Parliament in charge as Caretaker President for 90 days until elections are conducted.