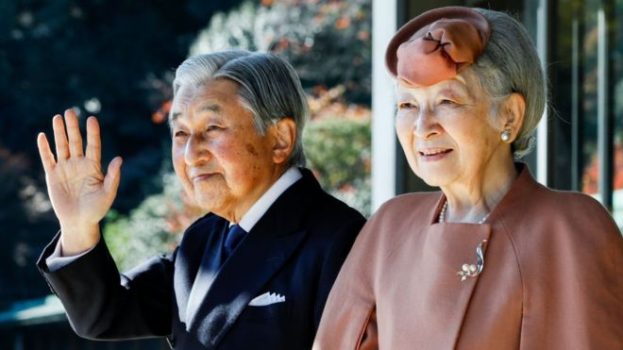 Japan’s Emperor, Akihito on Tuesday morning declared his abdication in a historic ceremony held at the Imperial Palace in Tokyo, the country’s capital.

Speaking at a brief ceremony in the state room of the imperial palace a day before his eldest son takes over the throne, the 85-year-old Akihito said he was praying for peace and happiness for the people of Japan.

Emperor Akihito also thanked the people of Japan for their support during his 30-year reign and said he hoped his successor’s time on the chrysanthemum throne will be stable and fruitful.

“Since ascending the throne 30 years ago, I have performed my duties as the emperor with a deep sense of trust in and respect for the people and I consider myself most fortunate to have been able to do so.

“I sincerely thank the people who accepted and supported me in my role as the symbol of the state.

“I sincerely wish, together with the empress, that the Reiwa era which begins tomorrow will be a stable and fruitful one and I pray, with all my heart for peace and happiness for all the people in Japan and around the world,” he said in remarks broadcast live on TV.

Earlier in the day, the emperor took part in a Shinto ceremony to report his plans to the mythological ancestors of Japan’s imperial family.

The main ‘Ceremony of the Abdication’ took place in a state room of the Imperial Palace in front of about 300 people including Prime Minister Shinzo Abe, Crown Prince Naruhito and Crown Princess Masako.

Also speaking after the ceremony, Abe said: “While keeping in our hearts the path that the emperor has walked, we will make utmost efforts to create a bright future for a proud Japan that is full of peace and hope

Although the emperor holds no political power, Akihito served as a national figurehead, endearing himself to many Japanese people during his reign by frequently interacting with those suffering from disease and disaster.

In a rare speech in 2016, Akihito, who had surgery for prostate cancer in 2003 and a heart bypass operation in 2012 said that he feared his age would make it hard for him to carry out his duties and strongly hinted that he wanted to stand down.

In his last public address as emperor, Akihito, who was given permission to abdicate after the 2016 speech handed over the symbols of power to become the first Japanese monarch to stand down in more than 200 years.

His eldest son, Crown Prince Naruhito will ascend the throne later on Wednesday when a new era called Reiwa, meaning order and harmony will begin in Japan’s unique calendar.

The 59-year-old Prince Naruhito will become Japan’s 126th emperor and will officially lead the country into the new Reiwa era, marking the end of the current Heisei era which began when Akihito ascended the throne in 1989.

The Oxford University graduate is married to Crown Princess Masako and their only child, Princess Aiko was born in 2001.

Donald Trump and Vladimir Putin were among world leaders to send tributes to Akihito. Trump, who will be the first world leader to meet the new emperor during a visit to Tokyo in May voiced his heartfelt appreciation to the imperial couple while Putin thanked the emperor for promoting Japan’s ties with Russia.

On his own part, the South Korean president, Moon Jae-in thanked Akihito for his contribution to peace and bilateral ties.