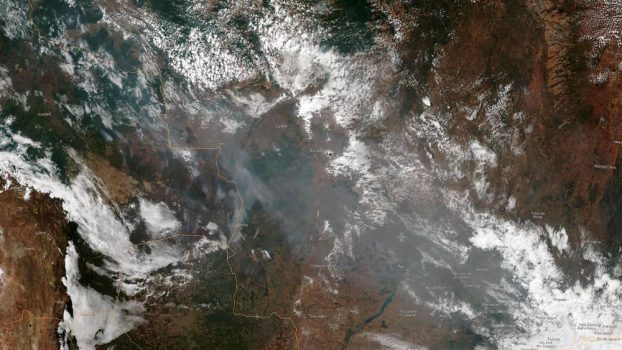 Brazil’s president, Jair Bolsonaro has accused France and other countries of interference and having a colonialist mindset while expressing fears over the fire currently ravaging the Amazon Rain Forest.

The number of forest fires in Brazil since January are more than 74,000 and have increased by 83% compared to the same period last year. They emit smoke which is visible from 400 miles up in space.

World leaders are increasingly expressing worry over the situation as the Amazon, described as the world’s lungs is a major  absorber of carbon dioxide from the atmosphere.

“Our house is burning. Literally. The Amazon rain forest, the lungs which produce 20% of our planet’s oxygen is on fire,” Macron tweeted.

Responding to Macron’s tweets, Bolsonaro hit back, saying: “I regret that Macron seeks to make personal political gains in an internal matter for Brazil and other Amazonian countries. The sensationalist tone he used does nothing to solve the problem.”

In a second tweet, he said: “The French president’s suggestion that Amazonian matters be discussed at the G7 without the involvement of countries of the region recalls the colonialist mindset that is unacceptable in the 21st century.”

Mr. Bolsonaro further claimed that news organizations around the world had exploited the fires to undermine his government, adding that: “Most of the media wants Brazil to end up like Venezuela.”

Just eight months into his presidency, the right-wing president has made it clear that he wants to open the Amazon up to the demands of mining, agricultural and logging companies.

This is even as federal prosecutors are investigating a Brazilian newspaper advert which called on farmers to burn parts of the forest to show Bolsonaro their willingness to work.

Worried by changes to how the projects were being chosen under Mr. Bolsonaro, the Norwegian and German governments stopped funding anti-deforestation projects in Brazil. President Bolsonaro however insists his country does not need the funding.