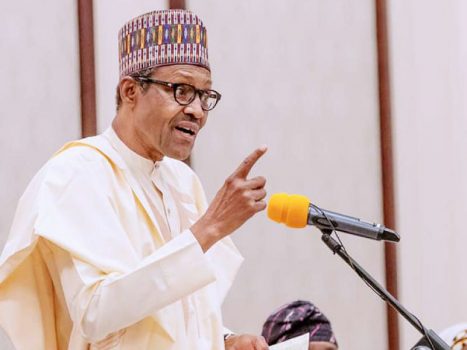 \Nigeria’s President, Muhammadu Buhari on Monday expressed fear over the country’s population explosion which he described as a frightening prospect.

The president who was speaking to the 43 ministers-designate who will assume office on Wednesday said his administration needed to take drastic measures to find a solution to the worrisome trend.

His words: “By average estimates, our population is close to 200 million today. By 2050, UN estimates show that Nigeria will be third globally, behind only India and China with a projected population of 411 million.

“This is a frightening prospect but only if we sit idly by and expect handouts from so-called development partners. The solution to our problems lies within us.”

While reiterating his administration’s major focus of securing the country, improving the economy and fighting corruption, Buhari called on the ministers-designate to work in synergy towards achieving all set goals and objectives.

“None but the most partisan will dispute that we have made headway in all three areas. First, we have rolled back the frontiers of terrorism.

“We are actively addressing other challenges such as kidnappings, farmer-herder violence, improving the safety of our roads, railways, air traffic and fire control capacities.

“Second, we are steadily turning the economy round through investment in agriculture and manufacturing, shoring up our foreign reserves, curbing inflation and improving the country’s infrastructure.

“Third, we have recovered hundreds of billions of stolen assets and are actively pursuing control measures to tackle leakages in public resources. We will not let up in fighting corruption,” he added.