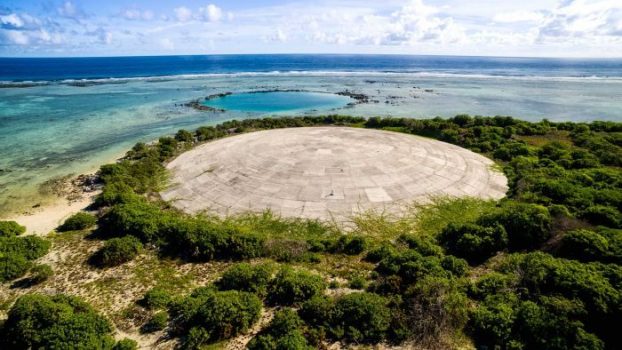 A concrete tomb containing more than three million cubic feet of America’s nuclear waste is reportedly cracking under the strains of climate change.

Officially known as the Runit Dome, the structure holds the radioactive waste produced by the 67 nuclear bombs which were detonated on the Marshall Islands between 1946 and 1958.

According to investigations, the United States government also conducted a dozen biological weapons tests on the islands before mixing the lethal debris and soil with concrete and burying it in the dome.

Despite being buried, the investigation found evidence that the dome, which locals refer to as ‘The Tomb’ was leaking.

The rising level of the ocean water means that the waters around the dome rise every year, with investigations revealing an evidence of coral bleaching and fish kills nearby as well as health impacts on local residents.

Although officials in the Marshallese government have requested assistance from the US, the American authorities have said the dome is on their land and is therefore their responsibility.

The president of the Republic of the Marshall Islands, Hilda Heine has however questioned how the nuclear waste could belong to the islands if the Marshallese did not produce it.

The Marshallese government made a pact with the US in 1986 and an international tribunal set up two years later said that the US should pay $2.3 billion to address property and health claims.

However, US Congress and courts have refused to do so as only $4million has been paid to date.

A scientific study published earlier this year suggested that levels of radiation in some parts of the Marshall Islands are similar to those near to Chernobyl in Russia and Fukushima in Japan.

Investigations also claims to have discovered that about 130 tons of soil were taken from a nuclear testing site in Nevada and buried within the dome, material which was never previously disclosed to the Marshallese.

There are also suggestions that the Chinese government may decide to pay attention to the troubles of the Marshallese as it attempts to gain favour and influence throughout the Pacific.

The investigations further revealed that out of the 4,000 US servicemen who spent three years tackling the debris, six died during the process, with hundreds of others developing illnesses including cancers which were connected to radiation exposure.

Experts say the waters around the Marshall Islands could be five feet higher by the end of the century and may cause the tomb to crack and spill its lethal waste into the ocean, with attendant devastating effects.