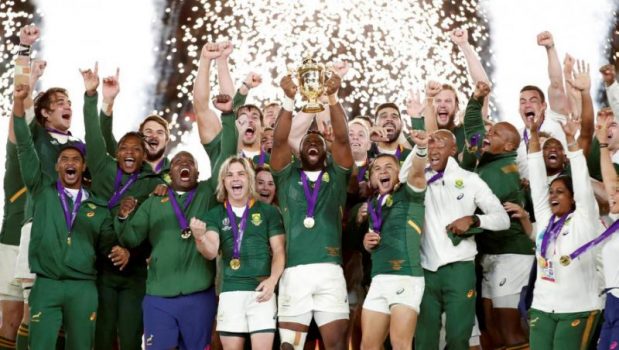 South Africa on Saturday at the International stadium in Yokohama, Japan defeated England 32-12 in the finals of the 2019 Rugby World Cup to win its third world title.

The Springboks captain, Siya Kolisi who was later joined at the podium by President Cyril Ramaphosa grabbed the Webb Ellis Cup, gave it a kiss and hoisted it high as fireworks exploded.

In what is seen as another transcendent moment for post-apartheid South Africa, Kolisi’s teammates, both black and white rejoiced behind him.

With the victory, the multiracial squad led by the first black captain in the Springboks’ 128-year rugby history swept England aside to a record-tying third World Cup title.

“We have so many problems in our country. A team like this, we come from different backgrounds, different races came together with one goal,” the 28-year-old Kolisi said.

The triumph also evoked memories of South Africa’s first World Cup triumph in 1995 and Nelson Mandela, the country’s president at the time handed the World Cup trophy to captain and backrower, Francois Pienaar.

Kolisi was shaking with adrenalin as he belted out the national anthem before the kickoff. He was at the heart of a massive effort by the Boks forwards, who brutalized England with their traditional power at the set piece to seize control of the game.

He also made more tackles than anyone other than two teammates and one Englishman.

At 18-12 with 20 minutes left, the final was still up for grabs but the Springboks opened up, showing the other side of their game and scoring tries out wide through wingers, Makazole Mapimpi and Cheslin Kolbe.