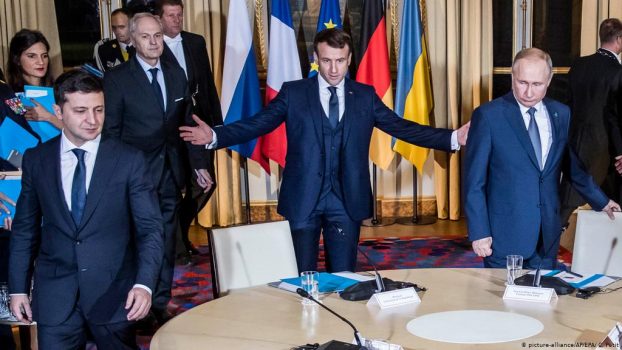 Russian President, Vladimir Putin and his Ukrainian counterpart, Volodymyr Zelensky on Monday met face to face at a Paris summit where they agreed to implement a full and comprehensive ceasefire in eastern Ukraine by the end of 2019.

At the end of the top level talks, Mr. Zelensky was however downbeat, saying little had been achieved at the meeting as he had wanted to see more issues which were of concern to both countries resolved.

The negotiations which were brokered by the leaders of France and Germany follow a big prisoner swap and the withdrawal of Ukraine’s military from three key areas on the front line.

In a written statement, the countries agreed to the release and exchange of all ‘conflict-related detainees’ by the end of the year.

The two sides also pledged to disengage military forces in three additional regions of Ukraine by the end of March 2020, without specifying which regions would be affected.

Additional talks will also be held within four months to take stock of the ceasefire’s progress. At a press conference after the talks in France’s Elysee Palace, Putin hailed the agreements as an important step towards a deescalation of the conflict.

He also called for a change in Ukraine’s constitution to give special status to the Donbas region, which is held by the rebels. He also pushed for an amnesty for people who had taken part in the seizure of Ukrainian territory.

On his own part, President Zelensky said the issue of Russian gas exports via pipelines through Ukraine had been unblocked after a dispute about transit tariffs and an agreement would now be worked out.

However, Russia and Ukraine continue to disagree on issues such as the withdrawal of Russian-backed troops and elections in areas of Ukraine held by the separatist rebels.

Mr Zelensky, a former comic actor was elected president of Ukraine in a landslide victory in April following a campaign built around bringing peace to eastern Ukraine.

Since then, his strategy has focused on trying to restart talks with Moscow but for that to happen, Zelensky has had to agree to some Russian conditions, including pulling back Ukrainian troops in the eastern towns of Stanytsia Luhansk, Petrivske and Zolote.

In June, Ukrainian troops and pro-Russian separatists withdrew a kilometre from Stanytsia Luhansk and by late October, the Ukrainians and separatists had disengaged from Zolote.  Early in November, they pulled back from Petrivske.