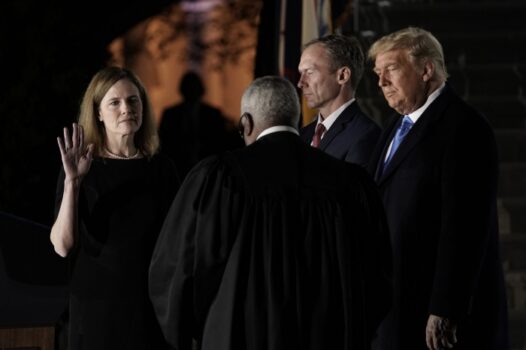 The US Senate has confirmed Judge Amy Coney Barrett to the Supreme Court which is seen by many Americans as a victory for President Donald Trump a week before the presidential election.

Republicans overcame unanimous Democratic opposition to make Judge Barrett the 115th justice of the Supreme Court and the fifth woman. The vote was 52 to 48, with only one Republican, Senator Susan Collins, who faces a tough re-election battle in Maine, voting against the president’s nominee in Monday evening’s vote.

It was the first time in 151 years that a justice was confirmed without the support of a single member of the minority party.

President Trump held an unusual swearing-in ceremony shortly after the vote on Monday night on the White House lawn.

“She is one of our nation’s most brilliant legal scholars, and she will make an outstanding justice on the highest court in our land,” Trump said.

The new justice is the third appointed by the Republican president, after Neil Gorsuch in 2017 and Brett Kavanaugh in 2018.