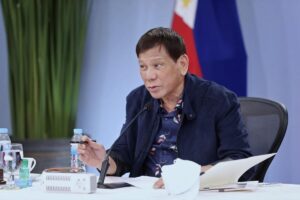 Philippine President Rodrigo Duterte said on Wednesday he has accepted his party’s nomination to run for vice president in next year’s election.

Duterte is barred by the constitution from seeking a second term as president.

He has said his decision was driven by love of country.

“It is really because I want to see the continuity of my efforts even though I may not be the one giving direction, I might be able to help,” Duterte said in addressing the party.

Some 400 members of the party were gathered in San Fernando City, north of the capital, Manila, for the convention while others attended online to observe COVID-19 health protocols.

The party is the first to hold a convention to select candidates for the May 9 national elections.

Under Philippine law, the vice president is elected separately from the president and Duterte’s party was also expected to name a presidential candidate later Wednesday.

Duterte’s popularity has remained strong despite the Philippines’ struggles through the COVID-19 pandemic, with rising infections and death rates and a slow vaccine rollout.