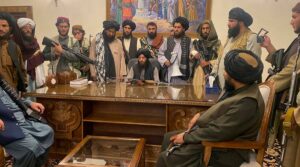 Chief spokesman of the group, Zabihullh Mujahid made the announcement on Tuesday.

Abdul Ghani Baradar will be the deputy leader and Sirajuddin Haqqani, son of the founder of the Haqqani network, has been named as interior minister.

Mullah Mohammad Yaqoob, son of Taliban founder Mullah Omar, has been named as defence minister. Hedayatullah Badri will be the acting minister of finance.

“The Islamic Emirate decided to appoint and announce a caretaker cabinet to carry out the necessary government works,” Mujahid said.

Mujahid named 33 members of “the new Islamic government” and said the remaining posts will be announced after careful deliberation.

Mujahid stressed that the cabinet was an “acting” government and that the group will “try to take people from other parts of the country”.

The announcement comes a week after the United States completed its withdrawal, ending its 20-year occupation of the country.

The Taliban had promised an “inclusive” government that represents Afghanistan’s complex ethnic makeup – though women are unlikely to be included at the top levels.