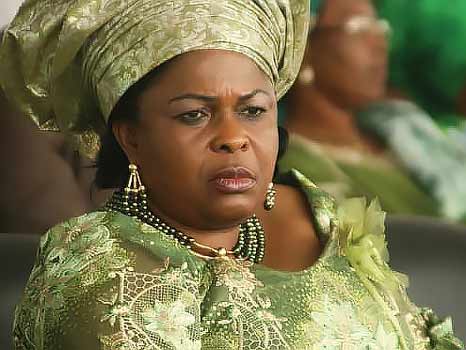 The IYC, which is the umbrella body of Ijaw youths worldwide, asked the EFCC to concentrate on its statutory duties of ensuring that criminals are brought to book rather than persecuting perceived enemies of their boss. President of the group, Mr. Udengs Eradiri urged the anti graft agency to follow due process in its war against corruption instead of the current media trial of the former First Lady.

Eradiri told newsmen in Yenagoa that the  alleged funds for which Patience Jonathan is being haunted by EFCC were ‘gratifications’ and thank you’ gifts from those whom she had assisted in one way or the other, a practice which he claimed did not start with her (Patience Jonathan) but rather a common phenomenon among other First Ladies.

“Now if you say Patience Jonathan should go and tell us how she made $1million, then you must start with other First Ladies, otherwise, it’s a witch- hunt. Patience Jonathan got her wealth from “thank you and there is nowhere in the law that says we should not receive thank you gifts. So, EFCC should stop this non-sense,” he said

The youth leader also sought to know the whereabouts of the alleged funds said to have been recovered from former governor of Bayelsa State, Diepreye Alamieyeseigha. According to him, should such amount of money get ploughed into the coffers of Bayelsa State, it could boost the economy of the state tremendously. “Bayelsa State money is in their coffers. Those are the issues they should be focusing on, returning stolen funds back to states, so that those states can use the money to boost their economy and not using the instruments of the state to witch-hunt the former first family, especially President Goodluck Jonathan,” Eradiri concluded.

However, the NDPPVF appeared more agressive in its own statement. The militant group threatened to launch heavy attacks on strategic oil installations should the EFCC for any reason arrest Dame Patience Jonathan, who is currently being investigated.