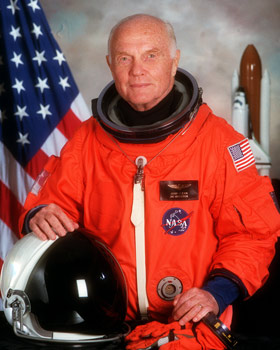 The first American astronaut to orbit the Earth,John Glenn has died at the age of 95. In 1962, Glenn captured global attention when he successful orbited the earth at a time when the US and the Soviet Union were in a bitter struggle to establish military supremacy. It was the heart of the Cold War and both countries jostled to establish superiority in the space race.

John Glenn was not the first American to be in space. Two other astronauts preceded him but he was the very first to circumnavigate Planet Earth. He was also one of the seven astronauts who began NASA’s Mecurty Program through which America sought to show off its military and technological advancement during the years of the Cold War.

Thirty-three years after he orbited the Earth, at age 77, Glenn made history once again as the oldest man to go to space.

After his years with NASA, John Glenn went into politics and was elected into the U.S. Senate to represent the state of Ohio. He served four terms in the Senate.

In his tribute shortly after his death was announced, U.S. President, Barak Obama said: “John always had the right stuff. He reminded us that with courage and a spirit of discovery there’s no limit to the heights we can reach together.”