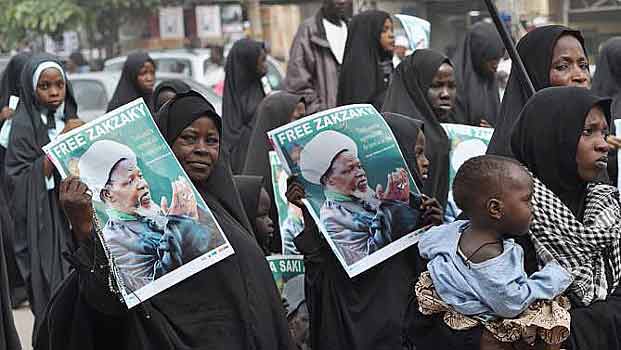 Hundreds of placard-carrying members of the Islamic Movement of Nigeria also known as Shi’ites on Thursday protested in front of the National Assembly in Abuja.

The protesters demanded the release of their leader, Sheikh El-Zakzaky who has been in detention for several months. Their colourful placards carried the words: ‘Buhari, Free El-Zakzaky.’

“We don’t believe in their protective custody since he has not been found guilty of any crime. We demand his unconditional release.

“The National Assembly set up a committee which was given two weeks to investigate the Zaria massacre of our members. It is more than one year now, we have not heard anything.

“We demand justice for our over 1,000 members killed in Zaria by soldiers. Among those killed were three biological children of our leader. They shot his wife, they shot him several times and kept him in detention without access to medical attention. We want him free.”

The Punch also reports that the protest was short-lived as the FCT Commissioner of Police arrived the scene accompanied by a water cannon truck and three pick-up vans loaded with anti-riot policemen.