More Than 85 People Killed In Massive Explosion In Kabul 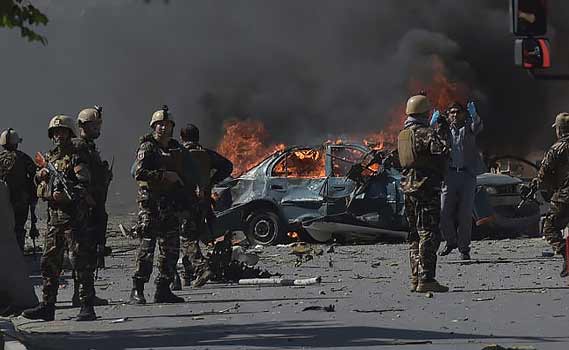 At least 85 persons have been killed and as many as 400 others injured after a massive explosion rocked the diplomatic area of Kabul, the Afghan capital.

Although the target of the deadly attack has not  been ascertained, spokesman of the Afghan public health ministry, Ismail Kawasi said most of the casualties from the car bombing incident were civilians, including women and children.

The blast, which occurred at the peak of Kabul’s rush hour, damaged most parts of the German, Chinese and Pakistani embassies, destroyed over 50 vehicles and injured many foreign diplomats.

A spokesperson for the Kabul police, Basir Mujahid believes the deafening blast might have come from an explosives-laden water tanker parked near the fortified entrance to the German embassy.

“It was a car bomb near the German embassy, but there are several other important compounds and offices near there too. It is hard to say what the exact target is,’ Mujahid said.

The Afghan Taliban that has been waging a war against the Kabul government and foreign forces has issued a statement through its spokesman, Zabihullah Mujahid, denying any involvement in the attack which has been widely condemned.

“We condemn in strongest terms, the terrorist attack that killed so many, including women and children. These heinous acts go against the values of humanity as well as values of peaceful Afghans,” a statement from the Afghan Ministry of Internal Affairs said.